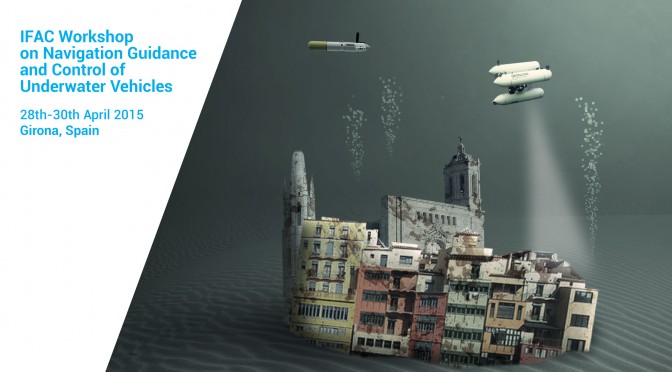 Welcome to the 4th International IFAC Workshop on Navigation, Guidance and Control of Underwater Vehicles (NGCUV’2015).

NGCUV goal is to show the latest investigations in Unmanned Underwater Vehicles as well as to promote the exchange of information and perspectives on the field’s current research. The Workshop brings together a diverse set of researchers who are jointly committed to foster the research and innovation in underwater robotics. The event series was initiated in 2003 and has been held in Newport (UK), Limerick (IR) and Porto (PT) since then. The present edition is co-organized by the Universitat de Girona and the Universidade do Porto, and is taking place on April 28th-30th 2015. Girona offers a great combination of cultural, gastronomical and sightseeing attractions that make it one of the most visited regions in Spain.

In addition, an interesting tutorial session entitled “ROS for AUVs” will be given by Dr. Narcís Palomeras (UdG, Spain). Besides the technical sessions, there will be an exhibitor area where 6 companies and institutions will showcase their products, services and projects.

I would like to thank all authors and people attending at NGCUV Workshop 2015 for their interest and collaboration. I hope you find the meeting fruitful and you have a pleasant time in Girona. I would like also to thank the organizing committee from the Underwater Vision and Robotics Research Centre (CIRS – VICOROB) of the Universitat de Girona and the Laboratório de Sistemas e Tecnologias Subaquáticas (LSTS) from the Universidade do Porto for their support and effort in the organization of this successful event.

Sponsor NGCUV 2015 and have your logo featured here. CLICK HERE

With the support of: